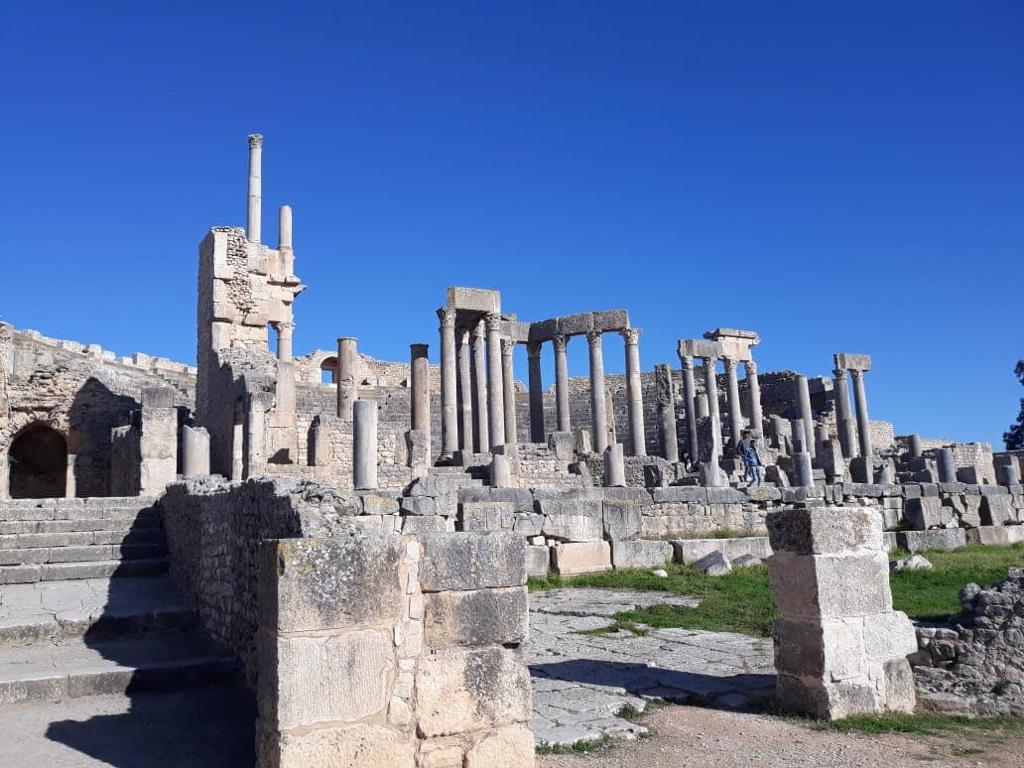 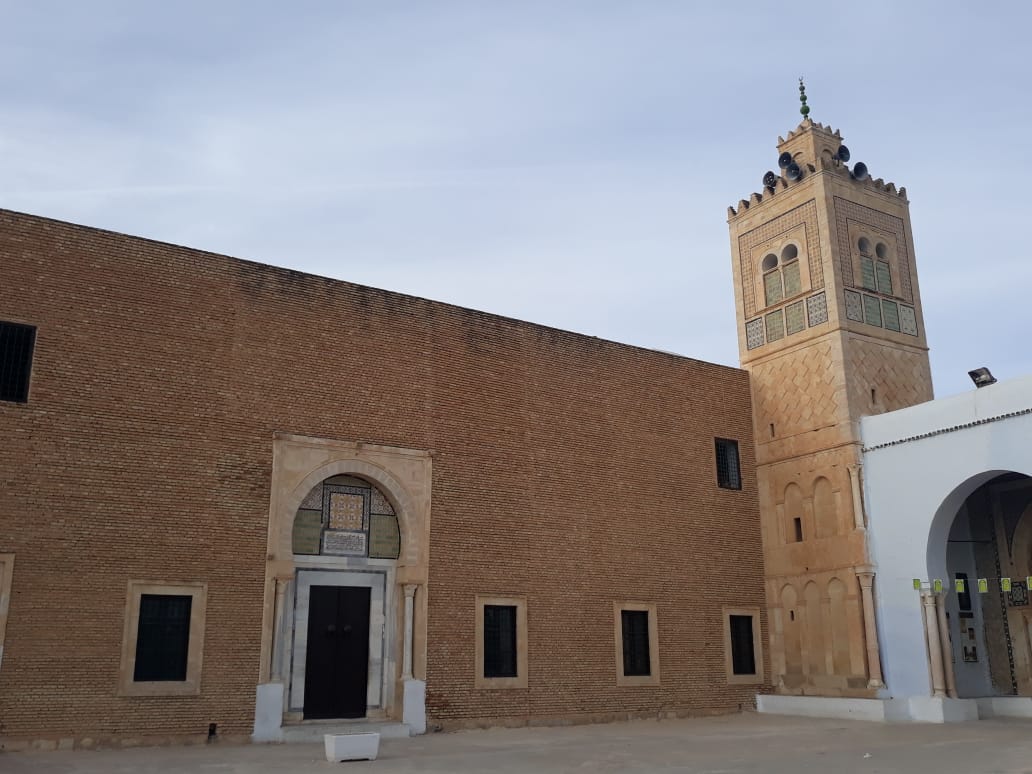 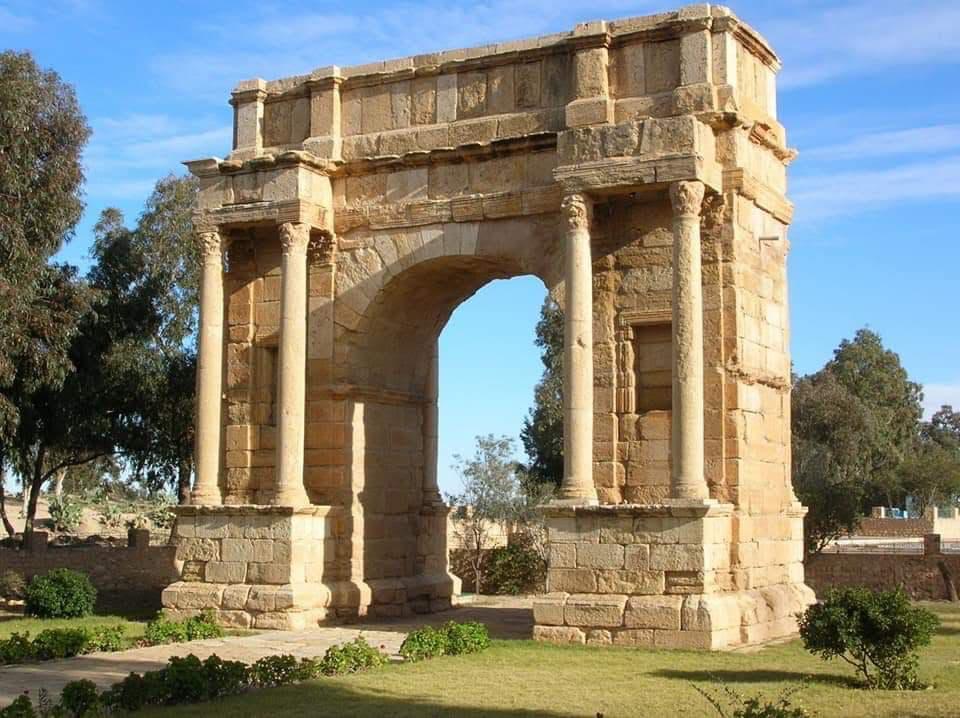 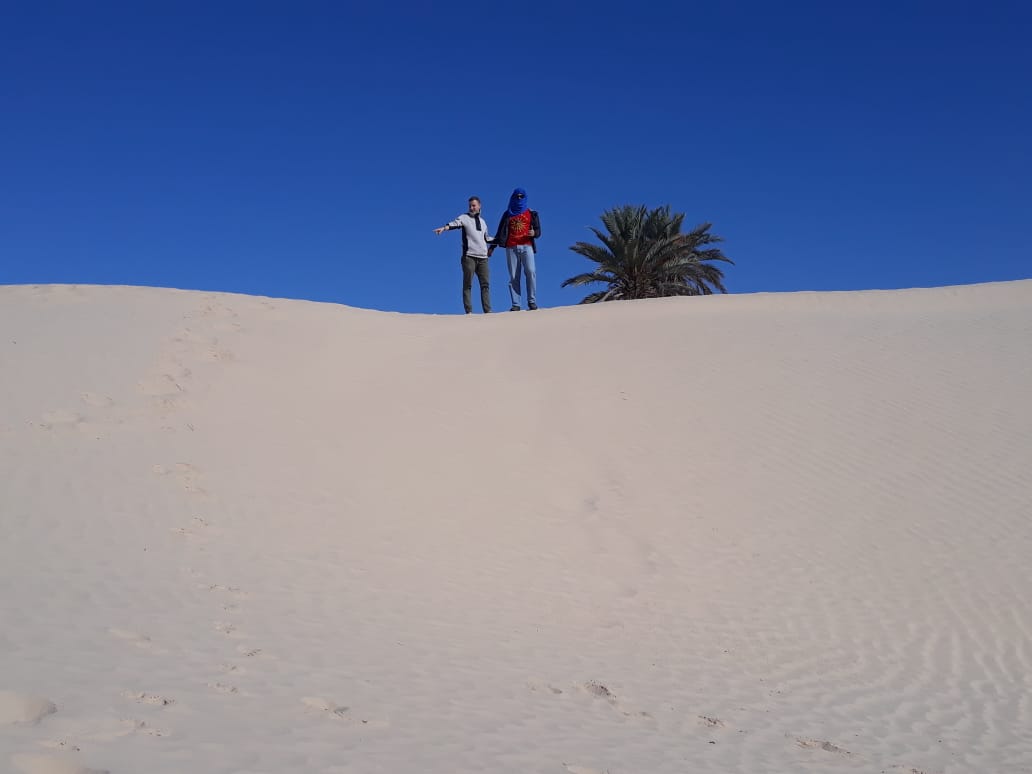 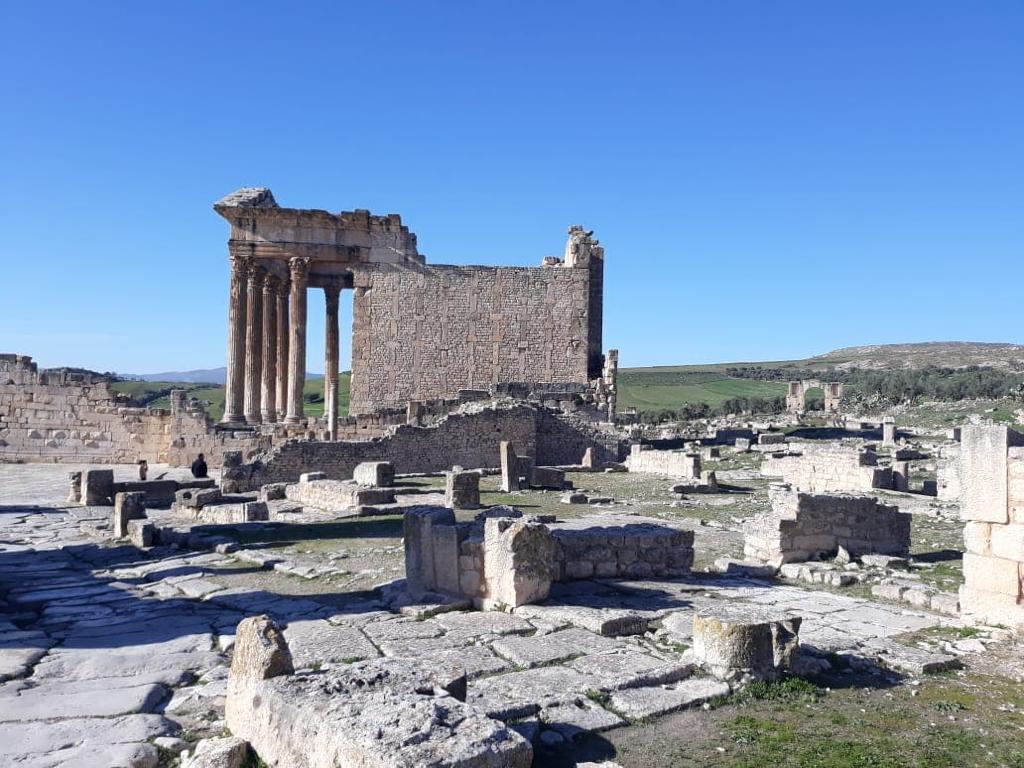 A tour in green Tunisia and going to the most important monuments and tourist attractions. At first, go to the picturesque city of Sidi Bou Said with its cobbled streets and blue and white houses, located on a bay overlooking the Mediterranean Sea. The area includes outdoor cafes, Tunisian restaurants, and small art galleries. The Ennejma Ezzahra Palace, dating from the early 20th century, features arches, ornate stucco, and carved tiles, while the Dar Al Annabi Historical Museum houses wax statues in traditional attire. In addition, the area includes a marina on a sandy beach. Then go to Kairouan Kasbah. Then go to Sbeitla, a small town in the center-west of the country 250 km from Tunis. It is especially famous for its magnificent Roman site. Sbeitla site is remarkable in the Capitol, which consists of three temples dedicated to the guardian deities of Rome. Near Sbeitla, one of Tunisia's largest sites, Makthar, has stunning ruins such as Trajan's Arch, the Great Baths, an elegant portico of columns, and Hydra, where the ruins of one of the largest Byzantine castles in the country are located. Arab Maghreb. . Then we go to Tozeur, a desert oasis city located in the southwest of the Republic of Tunisia. Then head to Douz, one of the cities of Kebili Province in southern Tunisia, about 550 km south of the Tunisian capital. Characterized by a hot and dry desert climate, Douz has an extended oasis and many villages follow. Then head to Matmata, a region in the southeast of Tunisia, west of the city of Gabes, which belongs to the wilaya of Gabes. Typical structures for a village are built by digging a large hole in the ground. Around the perimeter of this pit there are caves excavated to be used as rooms, as well as some houses with multiple pits and connected by a trench or underground passage called the "shed". Then head to El Djem, a Tunisian city located on the coast and administratively affiliated to the state of Mahdia. It is known about this city: - Trade - olive oil - production of ready-made clothes and leather - production of mosaics. It is witnessing high movement, and it contributes significantly to the revival of the Tunisian economy.

Accommodation For 08 Nights In The Hotels Indicated In The Tour On A Half Board Basis.

Day 01 Arrival, assistance and transfer to the hotel

The largest Roman mosaic in the world, a continuation of the antique of the old city of Tunis famous for its craftsmanship, its Ottoman palaces, the Great Zitouna Mosque, a reference for Arab-Islamic architecture, lunch, afternoon in the city for a walk, view of Gran Via dei

From Tunisia to Carthage to visit the Baths of Antoninus which ranks third in importance in the world Then visit the ancient Acropolis of Carthage, visit the Tanit Reserve called Tophet and the Punic PortsLunch and continuation of the picturesque city of Arab-Andalusian architecture with blue and white houses

It is called Sidi Bou Said where we wander between its typical houses and terraces, where we think of a

Arab architecture - Andalusia par excellence, where you can have tea with pine nuts in the famous cafe

Nats or Alia dinner and accommodation in the residence hotel

Departure to the ruins of thuja, the current accuracy. Stop by the medieval village of Testour, which he founded

The first Mudéjars to arrive in Tunisia in the sixteenth century after the Spanish Inquisition. Continue to the city of Daqqa, where we will visit the most important monuments in Africa, which are considered a human heritage. It was said in his theater that St. Augustine confessed the mourning and repentance of all the moments I spend in these pagan places. Accuracy, it was also a starting point for St. Augustine

She preaches between the coast and the western part of loyal Africa. Among other attractions we will visit

Theatre, Victoria Church, baths, houses and temples. Lunch and then to the Hammamet dinner and accommodation at the Golden Yasmin kasbah kairouan hotel

Departure to visit the Great Mosque and the tomb of the barber, where the companion of the Prophet Muhammad was. Continuation of the pools of water established by the Aglabies dynasty in the eighth century AD Continuation, free time in the markets. Lunch and departure to the Sbeitla ruins, which provide the greatest testimony after Carthage of the vitality of Christianity in Tunisia in the fourth and fifth centuries, with seven temples open to the faithful. The abundance of churches and public buildings gives the image of the city flourishing and worthy of being the capital of Christianity after Carthage. Among other attractions to visit,

Jucondus Chapel (the name of the bishop who was martyred by the Vandals), Bellator Church, Vitalis Church,

Servís Church (the Church Dedicated to Saints Gervasio, Portáis and Tryphon), the Church of San Silvano and San

Fortunato and the Church of Archbishop Honorio. Dinner and accommodation in Ras Al-Ain Tozeur

Breakfast and departure to visit Shabeka mountain oasis. Reach and walk through the palm grove between

ditches and waterfalls. We will also see its old town located in the Saharan Atlas Mountains. After a short rest, continue the journey along a mountain path towards the great waterfall of Tamghaza. Food and continue towards Caynon de Medici, where great films were shotBible, such as Jesus of Nazareth, Indiana Jones, The English Patient, Star Wars. In the afternoon visits from the old town I traveled to Tozeur, the Medina known for its authentic Arab architecture, dinner and accommodation in Ras al-Ain.

Breakfast and departure to the desert via the salt lake of Shatt el-Jerid by land. It is flat and covered with a layer of salt. Stop. Along the way we will see different colors of water and mirage. Arrival in Douz (door of the desert) Walking through the Dromari, optional quad cyclo, dinner and accommodation at Sun Palm Hotel

Breakfast and departure to Matmata. It is the last important stronghold of the Berber peoples located in the heart of the Dhahir chain where the Berber minorities hid using unique architecture, fully camouflaged and well integrated into the environment. It is about the Troglodyte Houses, where they depicted the outer parts of a Star Wars continuation of the barbarian village of Tuggen,

Located in the middle of the Dahar mountain range, visit the granary in Umm-Tamur also called

Gervas, silos in which the Berbers kept their grain and food at Rota and continued to dine and stay at les oliviers palace sfax. golden yasmin

Breakfast and visit Sfax, an authentic city surrounded by walls and still intact from globalization. As a continuation of Jem, where we visit the third largest amphitheater in the Roman world and the first in Africa, the world of food heritage and the continuation of a visit to the city of Sousse and

Breakfast and transfer to Tunis airport

Touristic Taxes At The Hotel (3 Dinars Per Day)